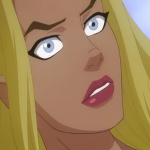 Uh this show! It's very Lord of the Flies! But with females & everyone's attractive. :)

I ship Bellarke sooo hard! Get out of here Lexana, I've waited for this since I no longer shipped Clark & Finn because Finn was a liar with a girlfriend. Also, I don't like that they are taking two powerful females and making them lesbians. It just feels like a guy's wet dream. Lexa should be with someone else, more of a Willow/Tara relationship from Buffy.
(If you don't know who let are, go youtube them!!)

And I'm not ready for Bellemy and Clarke just yet. Their relationship is cute as hell in the books, but they both got a bit more growing to do. Granted they are leaps and bounds from where they started in season 1. GREAT character development!!! --~ Lorisa! (talk) 11:40, March 17, 2015 (UTC)

Retrieved from "https://the100.fandom.com/wiki/User:Lorisa214?oldid=155100"
Community content is available under CC-BY-SA unless otherwise noted.