The Pre-Apocalypse History tells some details, notes, trivia, and events that have happened on Earth, before the first Nuclear Apocalypse in 2052.

Monty Green explained that before the Nuclear Apocalypse, Earth has run out of oil, which led to the Eligius Corporation sending Eligius III to search for habitable worlds for oil, though it was also identified as a colony mission. Earth's oil depletion may presumably explain why there were many environmental technologies and many solar panels everywhere, including the ones on different, electric transportations and the solar panel farm found in the Dead Zone. It may presumably explain why Floukru's Oil Rig was built in the northern East Coast, near Delaware and Maryland as shown on the map. This possibly shows why two dozen mega nuclear reactors had been built after the Second Fukushima Disaster. Because of the oil scarcity on Earth, this is to be the reason why the Eligius Corporation sent Eligius IV to extract and mine the asteroid Proxima 6 for Hythylodium, an incredibly efficient energy source. Without oil, people use refined ethanol derived from Earth corn as fuel for the Motorcycles.

The Second Fukushima Disaster was a nuclear disaster that has happened in Japan and it was caused by an earthquake that has heavily damaged the nuclear power plant. It was a second incident that happened after the first Fukushima Disaster in 2011. Due to the earthquakes that has caused a second problem after the first Fukushima disaster, the two dozen mega nuclear reactors had been technologically advanced and built to withstand any natural and man-made disaster, even a nuclear attack for at least 100 years.

The United Liberation Army (ULA) was a terrorist group that existed before the first Nuclear Apocalypse. Charmaine Diyoza was one of its members. The group is mentioned in "Pandora's Box".

According to Diyoza, she claims that they fought a fascist government that had taken over her home country, the United States. The group took credit for multiple terrorist attacks that killed many civilians.

Though the leadership of the group is not stated, it seems that Charmaine Diyoza was their most prolific member. At the time of Diyoza's arrest, she was the most wanted criminal in the world.

In the history books in Sanctum, her face is next to Hitler and Bin Laden. Gabriel Santiago states that Diyoza was seen as a freedom fighter by some for her actions as well as a terrorist.

In "The Queen's Gambit," Diyoza expresses remorse for her actions in the group and the civilians she got killed, telling her daughter that the deaths of all of those innocent people was for nothing.

Due to the people, wearing gas masks and wiping off dusts from their shirts, it possibly implies that the severe droughts has led to the dust storms as it was mentioned that "it's really dusty outside." Water Rationing Protests also possibly happened due to severe droughts. The strong wind sounds can be heard in the diner.[1] These dust storms were known to be happening around the same time as Charmaine Diyoza's arrest as seen in "Nevermind."

Becca Franco's company was known for creating new science, and advanced technologies, including A.L.I.E., A.L.I.E. 2.0, the Memory Drives, Nightblood serum and other technology, for the space stations and Eligius Corporation. Becca's corporate infinity logo was found on the flags and on different technology in Sanctum, implying that Becca's company created new technology for the Eligius Corporation. During Gabriel Santiago's video logs, you can see an infinity logo on the bottom right. Also, there are infinity signs found on the computer screens in the background in Sanctum's lab. When Becca was 18 years old, she and her company did the coding and tech for the Eligius Corporation. The slogan for the company is "Seek Higher Things." Sometime during her twenties, Becca might have became the head of the company as she mentions that she now owned a space station called Polaris. Her company also owned a television news network, which mentions about it.

With the situation deteriorating on Earth, the Eligius III mission was launched at some point to colonize five potentially inhabitable worlds, though Monty Green's video message in "Damocles (Part 2)" also stated that they were looking for a new planet to tap for oil because of the oil depletion. As seen in Season Six, Mission Team Alpha succeeded in colonizing Alpha which they renamed Sanctum. However, as revealed in "The Garden," Mission Team Beta's mission on Planet Beta failed because their transport ship crashed on arrival, killing all but Doctor Colin Benson and preventing colonization. The outcome of the other colony teams are currently unknown though the Disciples on Bardo were originally thought to be descendants of another Eligius III mission team before it was discovered that they were actually the descendants of Second Dawn cultists that came to Bardo through the Temporal Anomaly after the Nuclear Apocalypse. In "A Little Sacrifice," Bill Cadogan tells Gabriel Santiago that things on Earth got worse after the mission left.

The Asteroid Mining Penal Colony is an off-world penitentiary, where the prisoners were sent to.

In "Echoes", an article titled "Contact Lost With Asteroid Mining Penal Colony" from the West Coast Herald can be seen on one of Raven's monitors as she talks to Jasper and Monty. It was implied that the Eligius Corporation was involved with the penal colony in space as well as mining.

According to Charmaine Diyoza and Miles Shaw, the prisoners were going to be left abandoned on the asteroid Proxima 6 after becoming sick due to the hythylodium that they were mining. Throughout the episodes, it was mentioned that the prisoners were mining on Proxima 6 for Hythylodium, and Diyoza's journal mentions it. All of this may imply that the asteroid Proxima 6 was the site of the Asteroid Mining Penal Colony, where Eligius IV may have been docked there at the time of Diyoza's uprising, which means that the mutiny may have happened at both the penal colony and Eligius IV. This could explain why Earth lost contact with the penal colony in space. When Diyoza and the prisoners successfully took over Eligius IV, the Asteroid Mining Penal Colony was either destroyed or abandoned, after the uprising on April 4, 2047. Eligius IV then left towards Earth.

The Tree Crew were an environmentalist group dedicated to saving the Earth. It was founded before the Nuclear Apocalypse. August, Lucy, and Callie Cadogan were members of this group with Callie dropping out from the Massachusetts Institute of Technology to join them.

Their goal is to expose the government's lies and end their unfair policies as well as protecting the Earth's environment.

In "Anaconda," during the eve of the Nuclear Apocalypse, it was mentioned in the television news that the Tree Crew's peaceful protest against the Wallace Administration, headed by President Wallace, Dante's grandfather, had gone wrong when the riot police went violent on them. Callie received bruises on her arms from riot batons while August received a massive bruise on his stomach from a bean bag gun round and Lucy got a head wound that required stitches.

They appear to be the inspiration for the name of the Grounder clan Trikru which is pronounced the same and uses Tree Crew's symbol as their own.

It is also revealed that some of the Tree Crew members are Second Dawn cultists when August calls to the cult members as "Tree Crew" during the confrontation with Reese Cadogan and the Disciples in the Second Dawn Bunker. 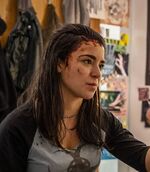 On the eve of the Nuclear Apocalypse, its mentioned that a public health alert has been declared due to an Ankovirus outbreak that originated in Russia.

It is unknown if the victims of the Ankovirus were killed or not when they are sick and infected.

The Global Warming is the ongoing rise of the average temperature of the Earth's climate system.

In the episode, "Anaconda," the Yosemite National Park suffered a wildfire. The news mentions the global warming rose above 110 degrees.

The human overpopulation has happened on Earth.[3][4]

According to the news, a child was born in Wayne County Internment Camp, which marked the global population reaching 11 billion people.

A.L.I.E. planned to reduce the population by killing 6.5 billion people with nuclear strikes. However, it killed most of the worlds population in the process.

According to the news and its headlines, including the financial, stock market report, the Earth's nations suffers an economic problem.

Retrieved from "https://the100.fandom.com/wiki/Pre-Apocalypse_History?oldid=214462"
Community content is available under CC-BY-SA unless otherwise noted.