The Glowing Forest, also known as Trishana or Trishanakru, is where Ilian is from. Some members of Trishanakru have been known to decorate themselves with lines of dots tattooed onto their foreheads. In the aftermath of A.L.I.E.'s demise, some of the members of Trishanakru, led by Ambassador Rafel, wanted to overthrow King Roan and Azgeda for protecting Skaikru, whom they blamed them for the deaths of some of their people, including Ilian's family. Their plan was to kill Roan and seize power, in order to destroy Skaikru. However, their plan ended, when Rafel was assassinated by Octavia Blake for going against King Roan. Later, Trishanakru was one of the allies Trikru called upon to help retake Polis from Azgeda.

After the Final Conclave, Trishanakru was merged with the other clans into Wonkru.

The clan's death ritual includes securing the dead body against a tree and having radiated glowing butterflies place their larvae to make a cocoon around the body. After metamorphosis, glowing butterflies emerge from the cocoon. The butterflies and the Luminous plants give the clan their name.[1]

It is implied that Trishanakru has friendly ties with Podakru, when Terro, a Podakru member was working with IIian, and was best friends with Jacov. 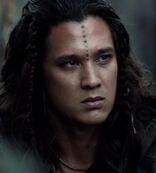 Retrieved from "https://the100.fandom.com/wiki/Grounders/Trishanakru?oldid=195708"
Community content is available under CC-BY-SA unless otherwise noted.