< Grounders
Back to page
View source

The Floukru, also known as Floudon Kru or the Boat People, was a clan led by the Nightblood Luna. The clan was allied with Trikru. The Floukru are now extinct; the majority of the Boat People were killed by radiation and the last remaining member, their leader Luna, was killed in the Final Conclave.

The clan lived on an oil rig, away from the mainland. This allowed them to live in peace, avoiding violence and war. The clan used boats as their means of transportation and divers with suits. They take in orphans, people fleeing wars, and those who tired of fighting and killing. Their peaceful philosophy makes them different from the other clans. 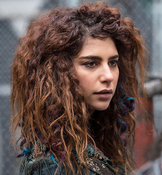