< Grounders
View source
watch 02:07
Spider-Man: No Way Home Trailer Dropped - The Loop
Do you like this video?
Play Sound

The first Flamekeeper was Callie Cadogan, who had been entrusted with the Flame by the first Commander Becca Franko. Other notable Flamekeepers were Titus, who served five Commanders (including Lexa), and Gaia, the final Flamekeeper. The spiritual order effectively came to an end when the Flame was destroyed to save its last bearer, Madi Griffin, from Sheidheda.

Two years after the first Nuclear Apocalypse, Becca Franko completed her latest artificial intelligence, the Flame, while on board her space station Polaris. She believed that the Flame was the key to saving humanity and became its first user and thus the first Commander.

Becca then descended back to Earth and came into contact with the Second Dawn survivors. She lived with them in the Second Dawn Bunker for a brief period of time, during which she became good friends with Callie Cadogan.

Shortly before Becca's execution by the Second Dawn, she entrusted Callie with protecting the Flame and finding it a worthy bearer. Callie then led a group of defectors out of the bunker and back to the ground using Becca's Nightblood serum, becoming the origin of the Grounders. Becca became a martyr to later generations of Grounders, and they established a tradition in which whoever took on the Flame became their new Commander.

Not much is known about the early history of the Flamekeepers after that. At some point, the spiritual order was established, with Callie given the title of Kalliope Pramfleimkepa ("Calliope, the First Flamekeeper" in Trigedasleng). The Flamekeepers were based in the Polis Temple.

The Flamekeepers are the leaders of the Grounders' faith which centers on the Flame. They train the Nightblood children that their scouts find, and oversee the transition between Commanders. The head Flamekeeper serves as an advisor and spiritual guide to the Commander. When there is no Commander, the Flamekeepers are responsible for keeping the Flame safe.

The Flamekeeper uses their scouts to search for Nightbloods. When a Nightblood child is discovered, they are brought to Polis to begin training for the Conclave, which is the process in which the new Commander is decided.

When a Commander dies, the Flamekeeper removes the Flame from their neck and initiates the Conclave. The belief among Grounders is that the Flame, a.k.a. Commander's spirit (which is A.L.I.E. 2.0), "chooses" its successor through this process. Once the victory horn is sounded, the victor is taken to the temple where the Flamekeeper performs the ascension ceremony. The Flame is implanted into the neck of the victorious Nightblood making them the new Commander.

Nightblood children are sometimes hidden from the Flamekeeper scouts. This was the case with Ontari, who was taken from her parents and trained by Queen Nia instead. As revealed in "The Queen's Gambit," when the Flamekeeper scouts came looking for young Nightbloods, Madi's family also chose to hide her true nature rather than have their young daughter take part in any of the Conclaves. 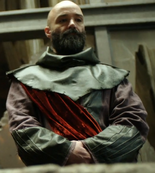 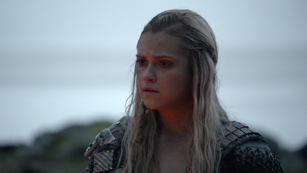 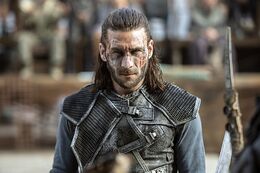 Lexa (to Titus): "Then do your job. Serve the next [Commander] as you have served me, Flamekeeper."
-- in Thirteen

Titus (to Clarke): "I must complete the ritual. Please. The Commander's Spirit must be passed on. This is my purpose. You must allow me to complete the task. It is what the Commander wanted."
-- in Thirteen

Roan (to the people of Polis): "I know you've all come here for an execution, but no one else will die here today. The City of Light has fallen, and there is no Commander left to rule us. Until another Nightblood ascends, I, King Roan of Azgeda, eldest son of Nia, Grandson of Theo, am Caretaker of the Throne and Keeper of the Flame."
Gaia: "You're a king not a priest! This is blasphemy."
-- in Echoes

Gaia (to Indra): "The Flame chose me as its protector. Our scouts honor that."
-- in DNR

Gaia (performing the Ascension Ceremony): "Through the dark, the Flame lives on. The body passes, but the Spirit is strong. The Spirit has chosen. Let the Commander ascend."
Indra: "What is this? Wanheda is no Natblida!"
Gaia: "The blood of the Commanders is your blood."
Clarke Griffin: "May the Spirit of the Commanders guide me."
-- in DNR

Clarke Griffin: "Gaia? What the hell do you think you're doing?"
Gaia: "Protecting the last true Natblida, as my Order has always done."
Clarke Griffin: "Whose side are you on? What are you, Fleimkepa or Wonkru?"
Gaia: "Blodreina saved my life, but that doesn't mean I can forget my faith."
-- in Exit Wounds

Gaia: "Can I show you something? (shows Madi the Flame) Madi, it's okay. Most of Wonkru believes the time of the Commanders is over. I believed it, too. Then I met you. You don't have to be afraid. As I told Clarke, I would never force you to accept this. It's beautiful, isn't it?"
Madi Griffin: "Yes. Does Octavia know you have it?"
Gaia: "Yes, and as long as Blodreina reigns, I will serve her faithfully. But I can't just forget my faith or my oath to protect the Flame and ensure its succession. The blood of the first Commander, Bekka Pramheda, is your blood, and I will never let anyone harm you."
-- in Acceptable Losses

Gaia: "The question is, who is the Fleimkepa without a Flame?"
-- in From the Ashes

Gaia: "We cannot ask the Commander because there is no Commander. She had fallen prey to Sheidheda. The Dark Commander took her over and I could not let that monster lead Wonkru, so I destroyed the Flame."
Knight: "That 'monster' was Sangedakru's greatest champion. You had no right!"
Gaia: "I had every right. I am the Fleimkepa."
Knight: "You were the Fleimkepa. You've sinned against us all. You're a traitor."
-- in False Gods

Gaia: "When I became a Fleimkepa scout, I was so young, so angry at my mother. In training, they taught that you must devote yourself to the Flame. All worldly concerns fall away. You can have no other loyalty."
Clarke Griffin: "Sounds lonely."
Gaia: "It was, but I had my faith. Now I don't know what I have."
-- in False Gods