Cuyler Ridley was a minor recurring character in the first season. He was portrayed by Teach Grant and debuted in "Contents Under Pressure".

Ridley was a 36-year-old former mechanic on Mecha Station who lost his wife in the Culling. He was on the Exodus ship when it crashed and died in the explosion.

Not much is known of his early life. He lived in Section B-17 in Factory Station. His mother's name is Alma Ridley and his father is deceased. He was 36 years old and married with a daughter.

In Contents Under Pressure, Ridley's wife sacrificed herself in the Culling so that their daughter would have a better chance at living. He attacked Councilman Marcus Kane later on, when the survival of the 100 implied that the deaths were unnecessary. Later he is seen judging Thelonious Jaha for his decision to allow The Culling to take place. When Ridley accuses Jaha of not understanding their pain, he silently looks down after Jaha screams that his own son is dead. When Jaha appoints Diana Sydney to the council, Ridley and Diana share glances, implying they planned the entire thing.

In Unity Day, Ridley is seen talking with Diana and Lieutenant Graco about their plan after the failed Unity Day bombing. When Diana suggested taking the Exodus drop ship by force, Ridley told them doing that would be detrimental to the rest of the people on the Ark, but Diana still orders it to be done. To buy themselves time Ridley confessed to building and planting the bomb to distract Kane. He reveals to Kane the bomb was supposed to take out The Council, but not just for causing the death of his wife. Ridley escapes with Graco and arrives with Diana and the rest of her faction as they prepare the Exodus ship for launch. Ridley finds Abby hiding behind some crates and tries to throw her out before Diana stops him. When Abby depressurizes the doors, Ridley is the first to try and close them. After the Exodus Ship doors are closed the ship launches but because of interference from the Mountain Men, the ship crashed on Earth, and everyone on board, including Ridley died.

Ridley is a strong willed individual. He has shown great passion for his loved ones, as he's extremely upset about the unnecessary death of his wife.

Ridley has reddish brown hair, brown eyes, a mustache, and a fuzzy beard. He is 5'9" and weighs 205 lbs. His blood type is A negative (information from his Ark profile shown onscreen).

Thelonious Jaha: "You are the station reps of the Ark and I don't blame you for losing faith in me. I kept the Ark's oxygen crisis from you. I lied about sending the 100 to the ground. But you can tell your stations that the deception ends here. You now know the whole truth... but there is one truth that stands above all the rest. Earth... is survivable. And the 320 souls that sacrificed their lives in the Culling gifted the rest of us the time that we need to make it to the ground. Mankind is going home."
Cuyler Ridley: "How do we know that's everything? How do we know you're not still lying to cover up for the Culling?"
Thelonious Jaha: "This afternoon, I declassified the minutes of all Council meetings."
Cuyler Ridley: "Is that supposed to make us feel better? All those people died for nothing."
Thelonious Jaha: "Please. We're all in pain."
Cuyler Ridley: "No. No, you don't get to do that. You pushed the button that sucked the air out of my wife's lungs. You caused our pain. You know nothing about how we feel."
Thelonious Jaha: "I lost my son!"
Diana Sydney: "I didn't know that. I'm sorry. My friends, please. Chancellor Jaha has sacrificed as much as any of us. But his loss, just like all of yours, is not in vain. The Chancellor's son died finding out that Earth is survivable. And because of your wife's sacrifice, your daughter will get to come down to the ground. That is not in vain."
Cuyler Ridley: "Ma'am, we can't trust them. I'm sorry."
Thelonious Jaha: "Then trust her. As of this morning, there's an open seat on the Council. Mine to fill until the next election. We need unity now... more than ever. What do you say, Diana?" (Diana nods and amidst the cheers, exchanges nods with Ridley)
-- in Contents Under Pressure

Marcus Kane: "You were seen planting the bomb, Ridley. You killed 6 people."
Cuyler Ridley: "Should have been 7. Jaha's lucky he cut his speech short."
Marcus Kane: "I know you're upset about what happened at section 17."
Cuyler Ridley: "I lost my wife. You're damn right I'm upset, but this is about more than the Culling. Workers all over the Ark are tired of getting screwed. It's our kids you sent to die on Earth, and who's on the first dropship? Not us. Over and over, Jaha and rest of you on The Council betray our trust. Today is your reckoning."
-- in Unity Day 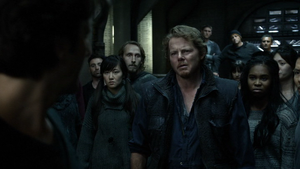 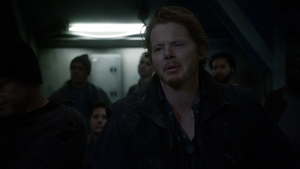 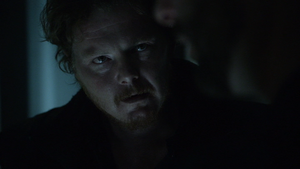 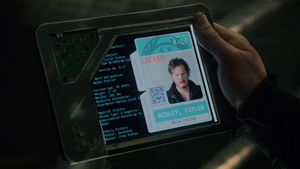 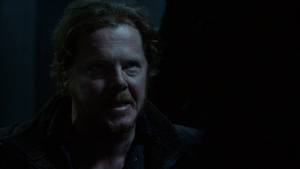 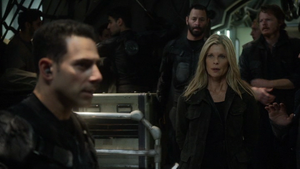