watch 03:27
Wiki Targeted (Entertainment)
Do you like this video?
Play Sound

Commander Shumway was a recurring character in the first season. He was an Officer on the Ark, and a loyal servant of Diana Sydney.

In Pilot, Commander Shumway accompanies Marcus Kane as he visits the Earth Monitoring Station to learn about the Delinquents' status. Later, after Chancellor Thelonious Jaha is shot, Shumway approaches Kane and tells him that Bellamy Blake was the shooter as Bellamy is the only person unaccounted for on the Ark. Shumway identifies Bellamy as a nobody and his motive for going to Earth is clearly his sister Octavia. Kane remembers how their mother had kept Octavia hidden for nearly 16 years.

Shumway then tries to convince Kane to go ahead with shrinking the Ark's population immediately using his new position as the Chancellor pro tempore. Kane decides to wait and Shumway continues to argue that sending 100 people to the ground only buys them a month while Engineering needs more than that to fix the life support systems if they can be fixed. However, Kane refuses and rebukes Shumway for his persistence, stating that they will do it "by the book" if it comes to that. Reluctantly conceding, Shumway is ordered to find out who helped Bellamy to get on the dropship as Kane knows Bellamy couldn't have done it by himself. Kane knows that they must have a traitor in their midst while the Delinquents have an assassin in theirs.

After Abby is discovered to have overused medication and blood in saving Jaha's life, Shumway arrives with Kane and announces her arrest. The next morning, Shumway operates the airlock as Abby is about to be floated. However, at the last second before Shumway can push the button, Jaha arrives and pardons Abby. Shumway hesitates when Jaha orders him to open the airlock, looking to Kane for instruction. After Kane reluctantly nods in agreement, Shumway follows Jaha's order.

In Twilight's Last Gleaming, Shumway shows Kane that Abby is broadcasting her husband's video warning everyone that the Ark is dying. Shumway tells Kane that its broadcasting everywhere and that Tech's trying to shut it down as they head off together in an effort to stop Abby's actions.

In His Sister's Keeper, in a flashback to a year before, Lieutenant Shumway enters the Masquerade Ball when a solar flare alert interrupts the party. Shumway orders everyone to take off their masks and present their ID chips as Bellamy attempts to sneak his sister out. Shumway approaches the two, noticing that Bellamy has his shock baton out and removing Octavia's mask. Bellamy lies that he's already scanned Octavia which Shumway buys before noticing that Bellamy doesn't have a scanner. The Lieutenant asks for Octavia's ID, but Bellamy begs him as a favor from a fellow Guardsman to just let them leave. However, Shumway points out that Bellamy is just a Cadet and not a Guardsman yet. Octavia tries to run and Shumway has her detained. As a result, Octavia is imprisoned, Bellamy loses his spot in the guard and their mother is floated.

A year later, after Bellamy returns home from his new job as a janitor, the now-Commander Shumway visits him. The two note the change in each other's jobs and Bellamy is less than pleased to see Shumway as he was the one who executed Bellamy's mother. Shumway defends his actions as being simply following orders and notes how good of a Guardsman Bellamy was, but Bellamy reminds Shumway how he said at the Ball that Bellamy wasn't a Guardsman. Shumway remembers how Bellamy said he'd do anything to protect his sister and hopes that it's still true.

Shumway reveals that Jaha is sending the 100 juvenile prisoners on a mission to Earth including Octavia. Both men know that it's unlikely that the kids will survive the mission, but would have a better chance if Bellamy was there. Shumway offers to get Bellamy a seat on the dropship in exchange for killing Jaha, offering Bellamy a gun with which to commit the assassination. Though Bellamy considers killing the Commander instead, he points out that all Bellamy will accomplish is getting Octavia sent alone to a radiation-soaked planet while Bellamy is floated for murder. Shumway warns Bellamy that they only have 20 minutes until the dropship launches and must act now if they're going to do it. Bellamy decides to accept Shumway's deal.

In Day Trip, after video communication between the Ark and the Delinquents is established, the Delinquents are allowed the chance to speak to their families. However, Shumway greets Dax instead of his mother as Dax expected. Shumway promises Dax that he can speak to his mother after they talk and confirms that Dax is alone. Shumway recalls that Dax was imprisoned for beating a man to death which Dax defends by stating that the man had stolen from him. Shumway states that he has a problem he thinks Dax can help him fix, offering to ensure Dax's mother a place on the first dropship and a choice assignment for Dax in exchange. Shumway asks Dax to kill Bellamy for him which Dax accepts. However, Dax fails and is killed by Bellamy with Clarke Griffin's help, revealing his deal with Shumway to Clarke in the process.

After the failed assassination attempt on Bellamy, Jaha agrees to pardon Bellamy in exchange for the name of the person who hired Bellamy to kill him. Along with several Ark Guards, Kane confronts Shumway in a corridor and arrests the Commander, calling him a disgrace. Shumway defends himself by stating that he is only fighting for what he believes in like Kane, but refuses to explain what that is. Kane has Shumway led away.

Later, Shumway is relieved when Diana Sydney visits him in his cell, having expected to be floated soon. To his shock and horror, Lieutenant Graco enters and knocks Shumway out with his shock baton as he protests that he did everything Sydney asked him to. On Sydney's signal, Graco breaks a light in the room and slashes Shumway's wrists, killing him and making it look like a suicide.

Shumway was a dedicated solider who followed orders of his superior officers. He had a conniving personality that he used to influence others to break the laws of the the Ark. However, his true loyalty was to Diana Sydney and her rebels.

Shumway had black hair and brown eyes and was of Asian descent. He had a lean muscular physique and appeared to be in his mid-thirties.

Marcus Kane: "You're a disgrace."
Commander Shumway: "I'm fighting for what I believe in, just like you."
Marcus Kane: "And what, exactly, is that?" (Shumway remains silent and is led away)
--Day Trip 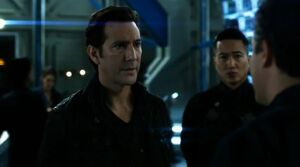 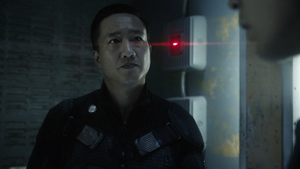 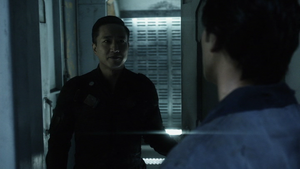 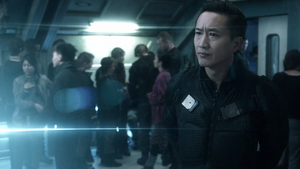 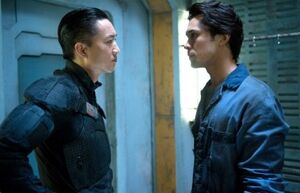 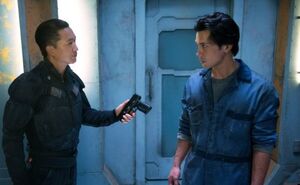 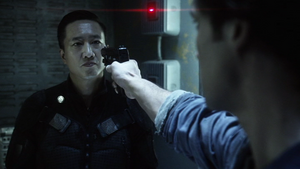 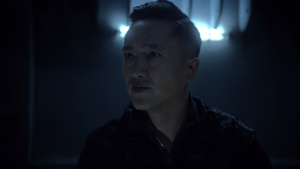 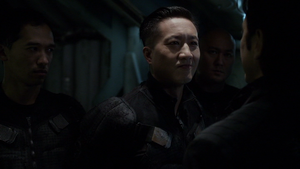 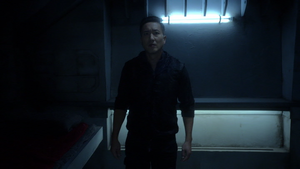 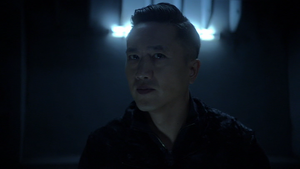 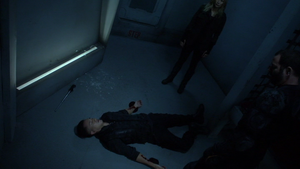 Day Trip
Add a photo to this gallery

Retrieved from "https://the100.fandom.com/wiki/Commander_Shumway?oldid=230954"
Community content is available under CC-BY-SA unless otherwise noted.