Chai Hansen portrayed Ilian on The CW's The 100. He was part of the recurring cast in Season Four.

Hansen was born on Koh Samui, a tiny island off the East Coast of Thailand. He relocated with his mother Sandra Hansen and his younger sister Sarah Romruen to Queensland, Australia at the age of seven. Hansen completed his HSC in 2007. He went on to win a scholarship in performing arts and finished the Diploma in 2011. In 2012, Hansen got the role of Zac Blakely in the series Mako Mermaids, his first ever lead in a television series. 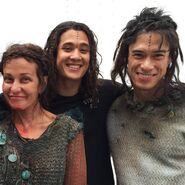 Add a photo to this gallery

Retrieved from "https://the100.fandom.com/wiki/Chai_Hansen?oldid=230180"
Community content is available under CC-BY-SA unless otherwise noted.