The Warriors Will
Bill Cadogan was a minor character in the fourth season. He was portrayed by John Pyper-Ferguson and debuted in "The Four Horsemen".

He was leader of the Second Dawn.

Little is known about Bill Cadogan's early life, when he was a child, his father beat him everyday.

At some point in his life, he founded the Second Dawn cult, a group of people who sought out to survive the end of the world.

In 2054, sometime after Becca Franco landed on Earth in Polis, they met each other and later, he burned her alive at the stake.

In The Four Horsemen, he appears in a video showed to Clarke and Bellamy by Jaha.

In God Complex, Cadogan was mentioned by Jaha when he talks to Marcus Kane.

In Red Queen, Cadogan was mentioned by Jaha when he talks about how Cadogan built the bunker.

In The Warriors Will, he was mentioned by Madi through Becca's flashback. After the original Nuclear Apocalypse, he and his followers stayed in his bunker. They encountered Becca, who had come back to Earth from Polaris in her escape pod. She offered them the Nightblood serum, but he and his cult decided to burn her alive.

He was a fanatical cult leader.

He had long brown hair that reached below his neck, and a full beard.

Cadogan and Becca were enemies. After Becca returned to the ground, Cadogan burned her at the stake. Possibly because of either her involvement with the Nuclear Apocalypse, or because of her Nightblood.

"From the ashes, we will rise" 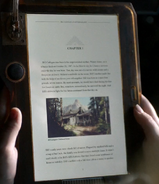 Article about Cadogan
Add a photo to this gallery

Retrieved from "https://the100.fandom.com/wiki/Bill_Cadogan?oldid=202308"
Community content is available under CC-BY-SA unless otherwise noted.